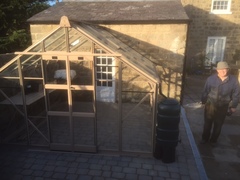 We sell and install many freestanding greenhouses onto soil, concrete, pavers and all manner of bases but we also offer lots of options if you need a greenhouse to go against a wall. These are some we have completed in the last few days and the stories behind them. 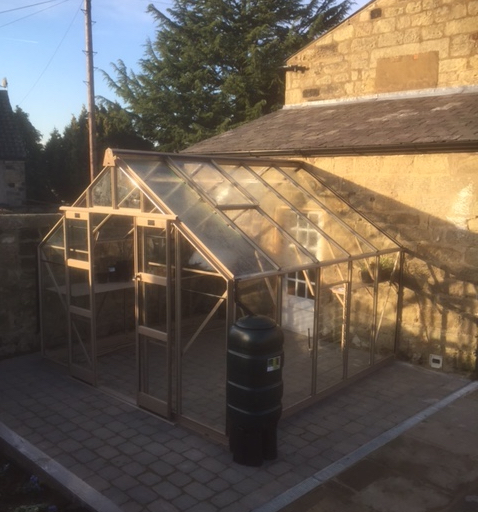 This is a 10' x 10' Titan "R" Type greenhouse we fitted to a very old sandstone outbuilding. The whole garden had been extensively remodelled this year and a brand new block base had been laid in preparation for the greenhouse. Fitting was not particuarly straightforward unfortunately as the wall although solid was not perfectly flat, vertical and true!

To build a greenhouse against a wall you basically need a flat wall that is 90° to the ground alongside it. Often the ground slopes away which is generally a design feature to allow water to drain away from the building, this causes a problem as the glass is always 90° and needs a frame built at exactly 90° to accommodate it. On this occasion the new base was absolutely perfect, however the old wall leant out at the top by around an inch and even at the top there was a distinct bow along one of the eaves bars. We worked alongside the landscape contractor who had done a fantastic job with the garden and the base and worked out a plan of action.

The only support for the back of the greenhouse roof is the wall and as this was proud of the base it was not too difficult to grind the bulging section of the wall in the centre away to create a flat surface for the entire greenhouse roof to screw to. All this left was the vertical sides being set slightly away from the wall which our landscaping friend filled in after the installation. The alternative method would have been to construct a timber framework to true up the wall. This would have been a particualrly challenging task for a competant joiner and would have needed tanalised timber accurately tapered and fitted against the wall which would also heve needed ongoing treatment to prevent rot. I believe the method we used has kept the look of the wall intact and the greenhouse has blended in superbly with the old building.

I would like to thank Luke who runs Wren Fencing and Landscaping Ltd. for all his help and assistance and especially for choosing us to work alongside him in creating a truly magnificent garden. https://wrenlandscaping.co.uk 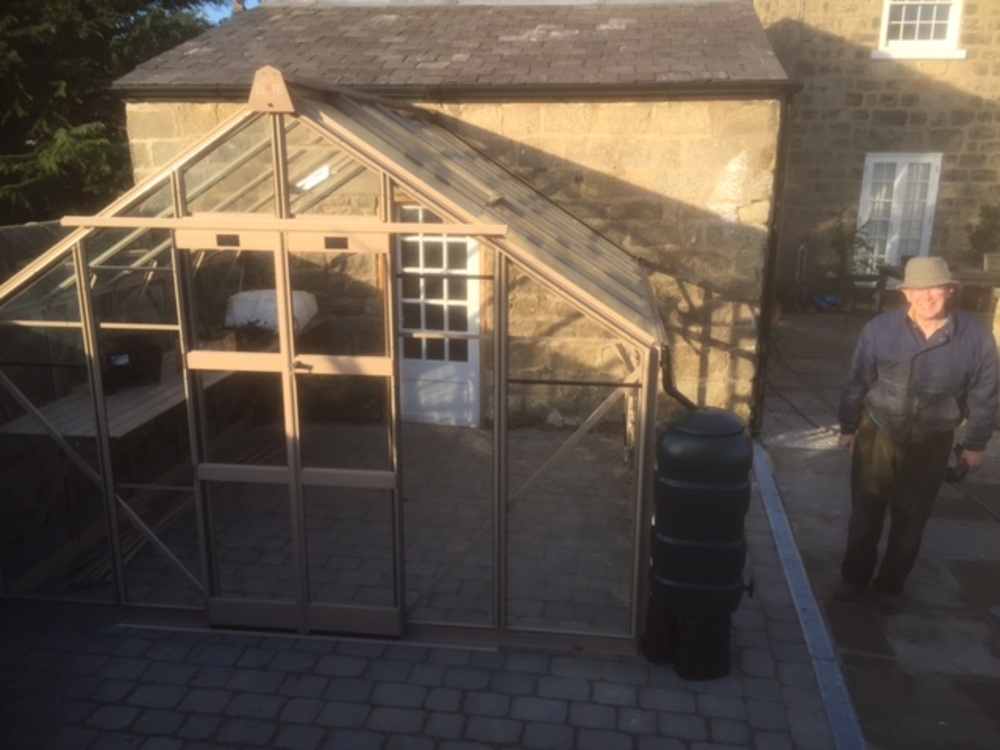 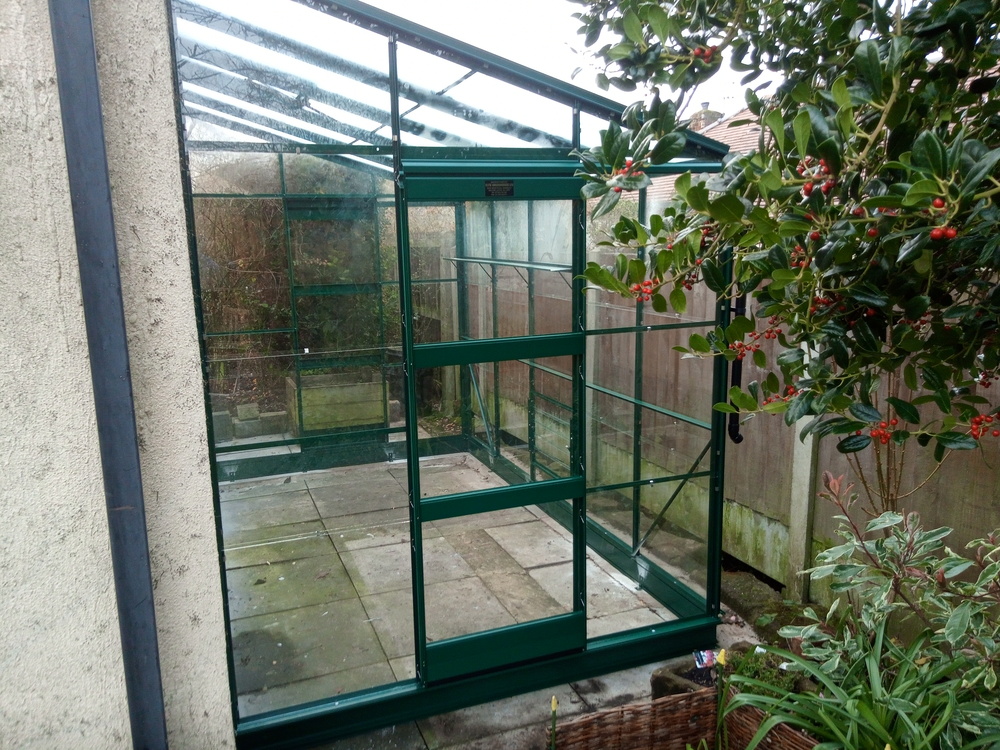 This is an Elite Kensington 6' wide lean to 10' long finished in green powder coating. This was fitted at the back of a garage onto a base that was not originally level. As we had done a site survey to look at this one we left instructions for the customer's builder to prepare levelling concrete to create a base 90° to the wall. From the above view you can just make out the shallow "wall" at the far end that tapers to nothing at the near end.

This greenhouse was also fitted with an additional door at the far end to allow access through as the greenhouse took most of the space between the garage and the fence. Overall this greenhouse has utilised an area that previously had offered little scope for growing and will capture a surprinsing amount of light and heat. We only had one fleeting glimpse of the sun during the build but it is December after all! 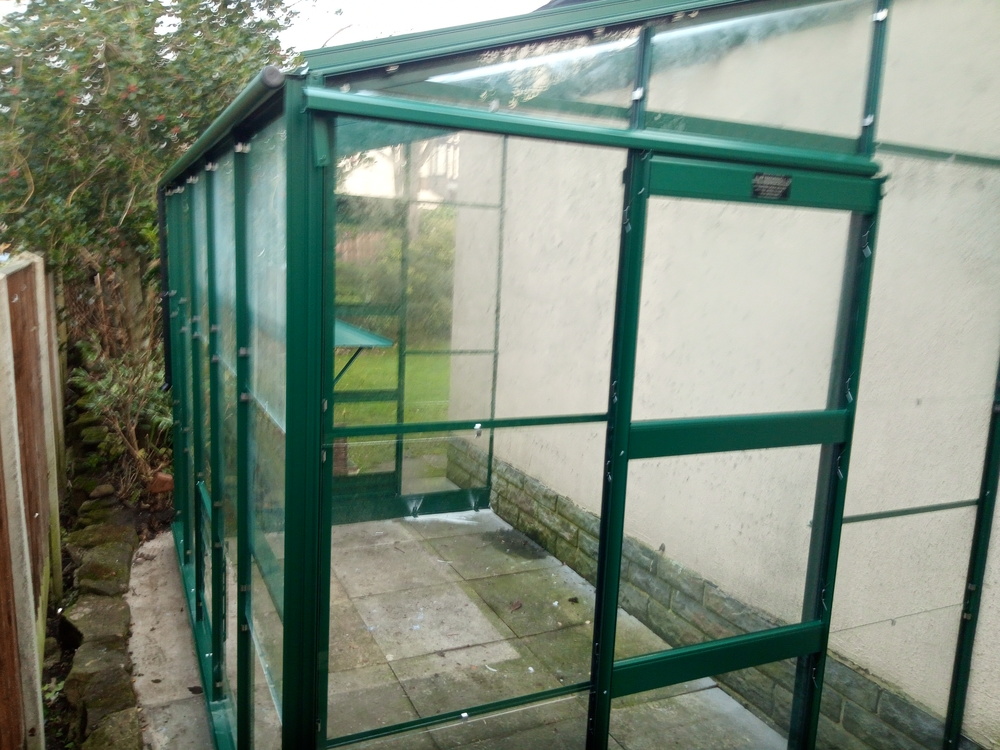 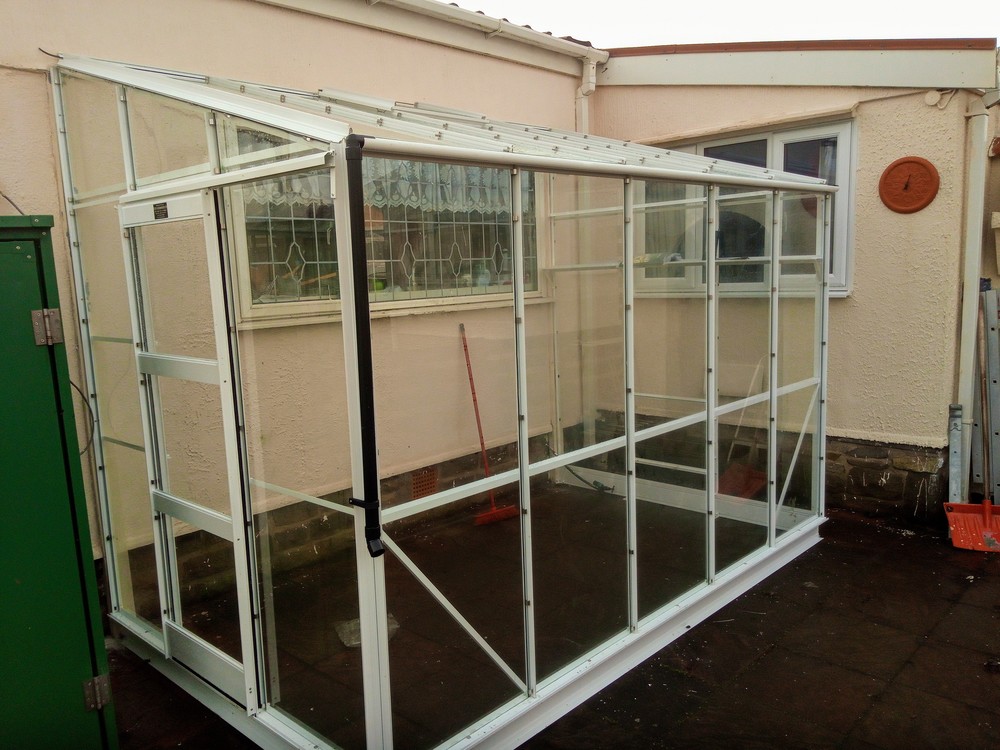 This is another 6' wide x 10' long Elite Kensington fitted out with toughened glass and is in the white powder coated finsh. This is attached to a residential unit on one of East Yorkshire's largest holiday parks on the cliff top near Withernsea. The base was good on this occasion but the wall was not originally brilliant due to the construction of the building, it is basically a timber frame on a brick base which did not line up too well. The customer was well aware of this though and had prepared timber vertical posts for us to atach the frame to.

The build went well and we left another happy customer although by his calculations his home will be in the sea within 30 - 35 years if costal erosion continues at it's current rate. As he will be well over 100 by then he was fairly relaxed about the prospect! You can just make out the cliff top in the photo below in the distance. 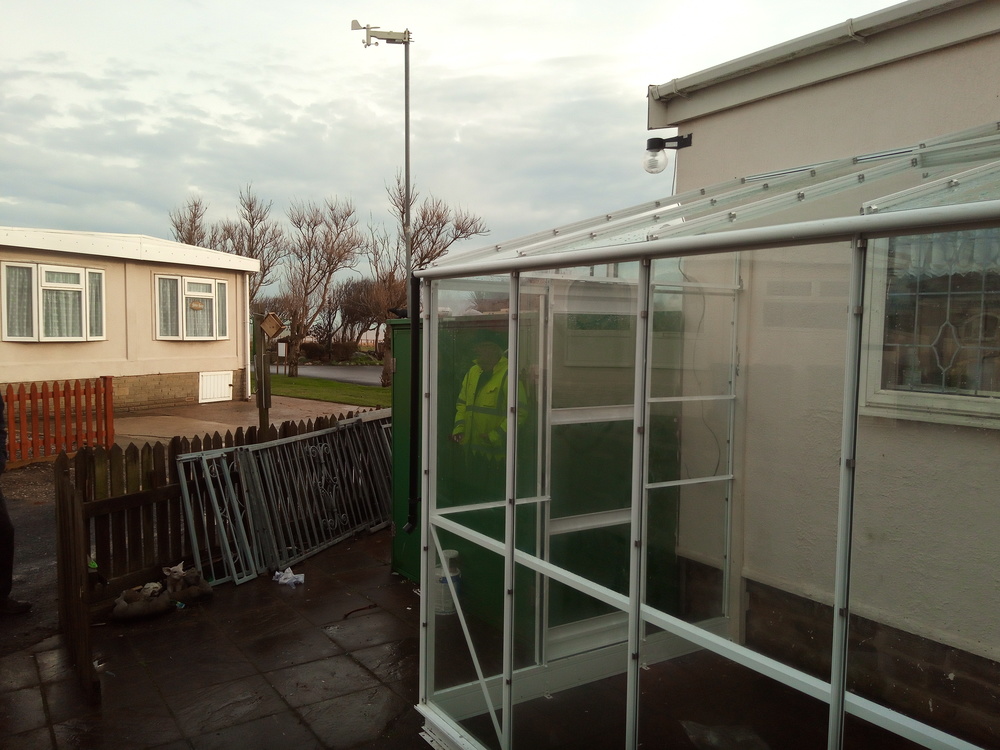